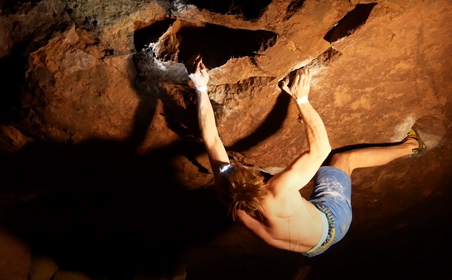 The first time that the idea of bouldering in Gran Canaria got into my head was when I saw a video from Jonas Winter climbing some really cool-looking boulders on this little island. That was some years ago, but over time I became more and more interested in travelling to places other than just the standard areas like Ticino and Font. After my trip to Norway last summer I was especially psyched to travel somewhere new, somewhere I had never been before. It also looked like a good opportunity for a vacation with my girlfriend.

Plans were easy: for the first two weeks I wanted to explore Gran Canaria with a buddy of mine, and then I wanted to spend the following two weeks there with my girlfriend. Oh man! Never before was a plan more crushed than that (more about that later). Things did not go south because of Gran Canaria being a bad bouldering spot, or unfit for a romantic vacation. In fact, the opposite was true. I was blown away by the quality of the bouldering on this little paradise island. The same goes for just having a good time on the island.

The main bouldering area is Mogan, which is on the south-west part of the island. Even on the first day, Noah and I were quite amazed by how good the climbing looked. The rock is basalt, so it’s volcanic and most of it climbs really nicely. It’s rare to find a lot of easy boulders so we were really surprised that, even in the lower grades, the quality was quite high.

Before we travelled to Gran Canaria we only had a few hard climbs on our list, but with all those opportunities we just started to run around the area getting psyched to climb everything. We started with some warm-ups and then moved on to El Cangrejo 7C/+, which we both climbed quite quickly, leaving us time to check out Tini Desplome 8A+/B. Tini Desplome was high on both our wish lists so psyche was high when we got the moves done, but our energy level was already low since it was late in the day.

After checking out some nice beaches close to Mogan, it was time for the next bouldering session. We headed to the lower sector of Mogan. Noah and I started the session with a quick ascent of Hueco Zap 7C/+, after which I moved on to Juega Juega 8B - an incredible-looking boulder on a steep face with some nice, but far-apart, crimps. My motivation went through the roof and all the moves except the first one went down quite early in the session. But the first deadpoint gave me a lot of trouble. Only once was I able to hit the next crimp and hold it for about a second before I found myself on the ground again. But I was sure that that boulder was possible and my plan to try it again was set.

We did night sessions most of the time. Climbing this way had left us with the opportunity to explore the island, chill during the day, and climb in the evening. That way the trip didn’t feel like a pure bouldering trip but felt even more like vacation.

After most of our sessions we went to our Airbnb and started cooking in the middle of the night. Fish was on the menu nearly all the time. And the fish there was so good. On the island it’s really easy to get fresh and affordable produce in the supermarket. And if you have time for an early dinner there are plenty of good restaurants with relatively cheap pricing.

So time passed by. Being able to climb Tini Desplome 8A+/B in my second session got me thinking about trying something harder. Brave Ruina 8B/+ came to mind. The climb is basically a 50-degree overhanging compression climb, so I consider it my thing. During my first session I was able to do all the moves. But the third move felt super hard. This was the thing I really wanted to do from there on.

Next on the list of problems I wanted to try was Aborigen 8A. Aborigen is one of those climbs where there’s really nothing to complain about - perfect landing, amazing holds and a perfect balance of power and technique. After standing on top of the kingline I went on to try Juega Juega again, but even though the first move felt better, it was clear that I was too tired for this one.

Back at Brave Ruina I could really feel my biceps, which were sore from climbing Aborigen the day before. Because of my sore biceps the first two moves, which had felt so easy on my first session, seemed quite hard. So I started two moves in, and after some time trying, I climbed without the first two moves to the topout. Now I was tired but also satisfied knowing that the full line could go down after a rest day.

With the feeling of having tons of time left I decided not to try Brave Ruina on the next climbing day as I wanted to get more stuff done. The session started with Desatorado, a 7C+ with a huge lockoff move at the end. Usually I’m really good at lockoffs, but on this one I always came two centimeters too short. After almost giving up I realised that there was an intermediate hold which I could use. With that new piece of microbeta I sat down at the start again and fired it off, finally!

To end the session I went to Brocoline 8A - a climb that might not look super nice but has some of the coolest holds and moves ever. Being already tired I had to give everything I had and fight super hard to get to the top. We returned to our accommodation incredibly tired but satisfied, unaware of what the next day held for us.

When we woke up everything still seemed normal. Of course we had checked the news every day about the Coronavirus situation worldwide, but Gran Canaria seemed safe, with a relatively low numbers of cases. Oh man, we were so wrong! Even though the number of patients on Gran Canaria might have been low, the numbers on the Spanish mainland started to accelerate. As a result, the Spanish government called for a lockdown. This meant leaving the house was only allowed if you had to go to work, shopping for groceries or to visit the doctor. Climbing was out of question.

All of a sudden we were stuck in our Airbnb and my head was filled with sorrows about our return (although at least we had access to a pool). Luckily, we had our flights back to Germany booked, so that we could leave one week after the lockdown started. Just how lucky we were became clear to us during the next few days. Our airline informed us that there were no earlier flights left, since everything was already booked up, so leaving earlier was not an option. Then we received the information that all flights from the 22nd of March onwards were cancelled. Since our flight was on the 21st of March we were extremely lucky to be able to leave the island at the eleventh hour.

Right now I’m back home in Germany and life is weird. Germany is also in lockdown. Not as strict as in Spain, we are still allowed to go outside to do sport on our own or with roommates. Thinking back to Gran Canaria I feel relieved. Relieved that we got home safely. But I also feel excited about returning to this beautiful island one day. This place has it all - beautiful landscapes, nice locals, good food, mostly good weather, reasonable pricing and amazing boulders. I would advise everybody who is into bouldering and is ok with higher temps and/or night sessions to go and check out Gran Canaria. Local climbers told us there are about 15 areas all over the island for bouldering. And even rope-climbing is also a possibility. And if you have a partner who is not into climbing that much there are plenty of other activities for you to plunge into. The island is really diverse, the north part is like a jungle and the south is more of a desert. So there is a lot to explore. But if you are more into chilling at the beach, that is always an option too.