It was summer, and summer time is Rocklands time. Being psyched for the past few months, I was training as hard as I could. The wishlist of boulders I wanted to try was endless, but I wasn't sure if I'd be fit enough for them.

My main goal was to finish Mooiste Meisie, a boulder I couldn't finish during my stay in 2017. Although this might sound stupid, it is a special boulder for me. In bouldering, getting your ass kicked and failing is part of the game, but with this climb it was different. After failing to tick this boulder off my list in 2017, I was having problems getting my ass back into the ring, and doubted my own abilities as a climber.

Coming back to the end of summer semester 2018, and this time I knew I was prepared. I knew I was stronger and I knew it just had to happen this time.

With the setback from last year, my main goal was to finish Mooiste Meisie. I had no plans beyond that, and every additional boulder would be a bonus. This mindset might have been one factor why this Rocklands trip went so well. The other factor was that I was already thinking about my big goal for winter - a project in Ticino that would require me to be at the very top of my game.

So Rocklands didn't feel at all like the main goal, I just took it as an opportunity to have a good time during my semester break and to stay in decent shape for winter. With this in the back of my mind, I was way more relaxed than usual. This made the Rocklands trip one of the climbing trips with the least swearing, at least from my side. Being so relaxed, I even enjoyed closely failing to send hard boulders, because it made me realise what I'm capable of.

Back to Mooiste Meisie: On the first day back in the Rocklands I tried a lot of hard stuff, and towards the end of the day I decided to check out the moves of Mooiste Meisie again. As soon as I walked around the corner to revisit this beauty, I immediately remembered why I was so attracted by this line.

In the blink of an eye I had my shoes on and had begun checking out the moves. Although I was super tired, it felt really good, however really good was not good enough. Being too tired from all the climbing before, I decided to stop after one hour and try it again after a restday.

On the first rest day I came up with the plan. First I wanted to send Black Shadow, and I wanted to send it quick to spare enough power and time for Mooiste Meisie. I was sure that I could finish Black Shadow quick, since I had tried it before. I wasn't sure about Mooiste Meisie, however. Planning to finish both in one session and at the beginning of the trip did feel a bit cocky, but somehow I was able to pull it off. 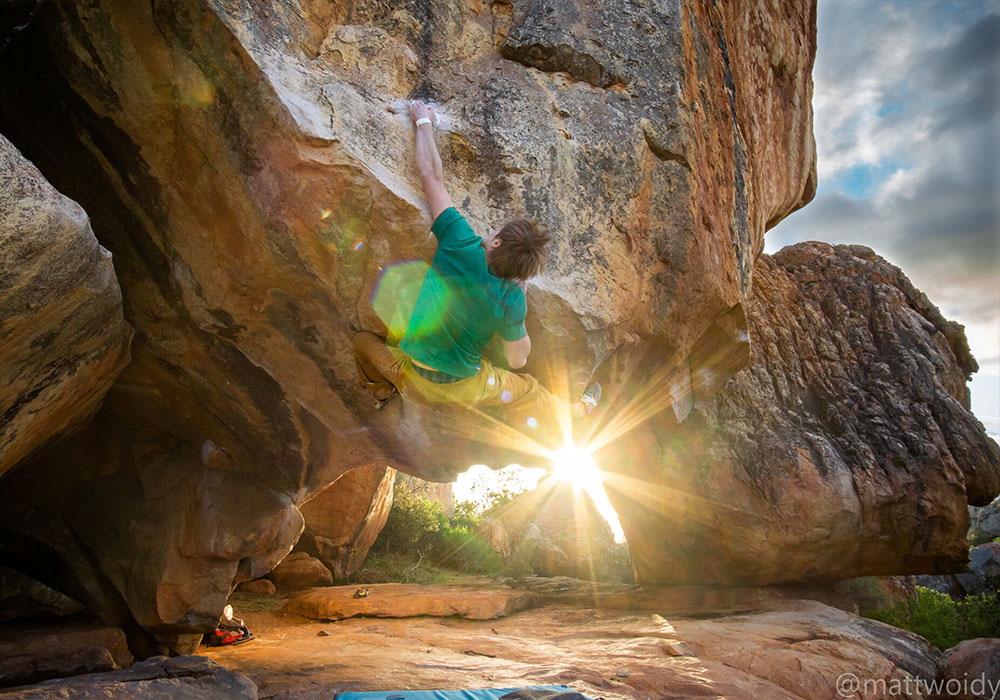 On both boulders, I expected the usual delicate dance, where each mistake meant failure, however during the climb it actually felt like I had energy to spare and was dominating the boulder. At the end of the day, I stood on top of Mooiste Meisie in disbelief, and struggled to realize that I'd just achieved what seemed impossible the same morning - climbing both Mooiste Meisie and Black Shadow in one day.

Now I was ready to search for new challenges and I found plenty of them! One climb I was really psyched about was Book Club, a fairly new climb established by Shawn Rabatou in 2017. It follows an obvious crack through a 45 degree overhanging wave. The style requires tons of core and bicep power, as well as resistance. Long story short, it's 100% my style. After a lot of beta refining I took down Book Club on my 5th session. 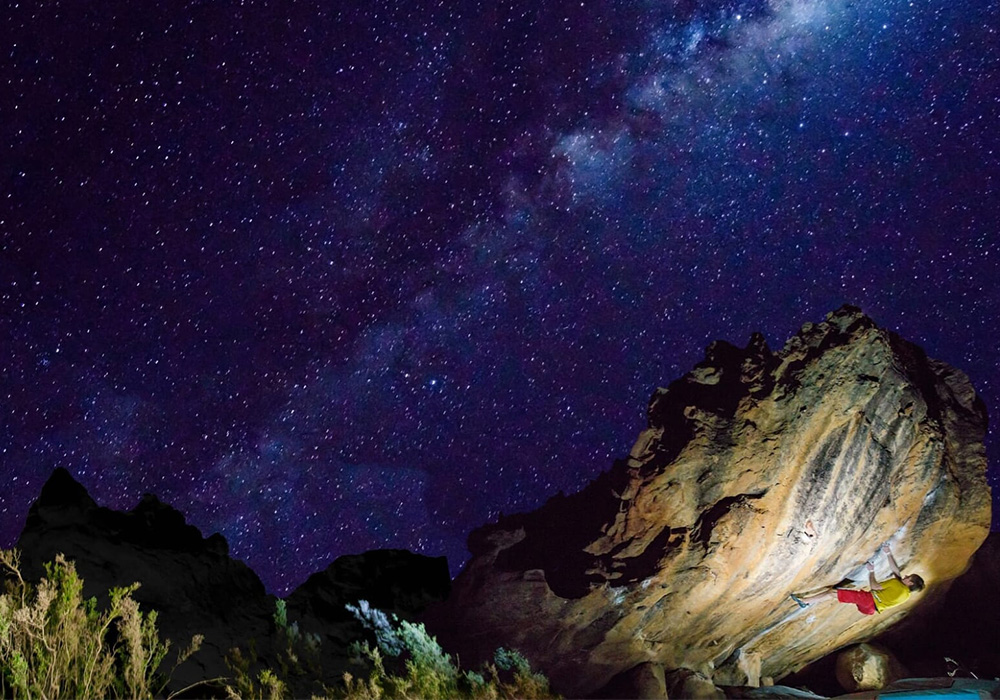 Having done Book Club, I didn't know what to try next, which is a quite a strange feeling if you're in the Rocklands. But after a few days, I'd pulled myself together and decided not to try the next super hard thing, since I was already happy with my performance and was psyched just to climb a lot. Everybody who knows me knows I need a challenge, so I decided to try a lot of boulders between 8A and 8B to have a good challenge without the pressure to climb at my absolute limit (even though I would say 8B is close to my limit most of the time).

In the end I ended up with a list of 14 boulders graded 8A and harder, including some highlights like Golden Shadow, King of Limbs, and Armed Response. The real highlight of my trip was the last day. In Rasta Roof, I found a really good boulder and finished the trip totally exhausted, but 100% happy. There was nothing else I could have wished for and I was kind of excited to go back home to see all my friends again. 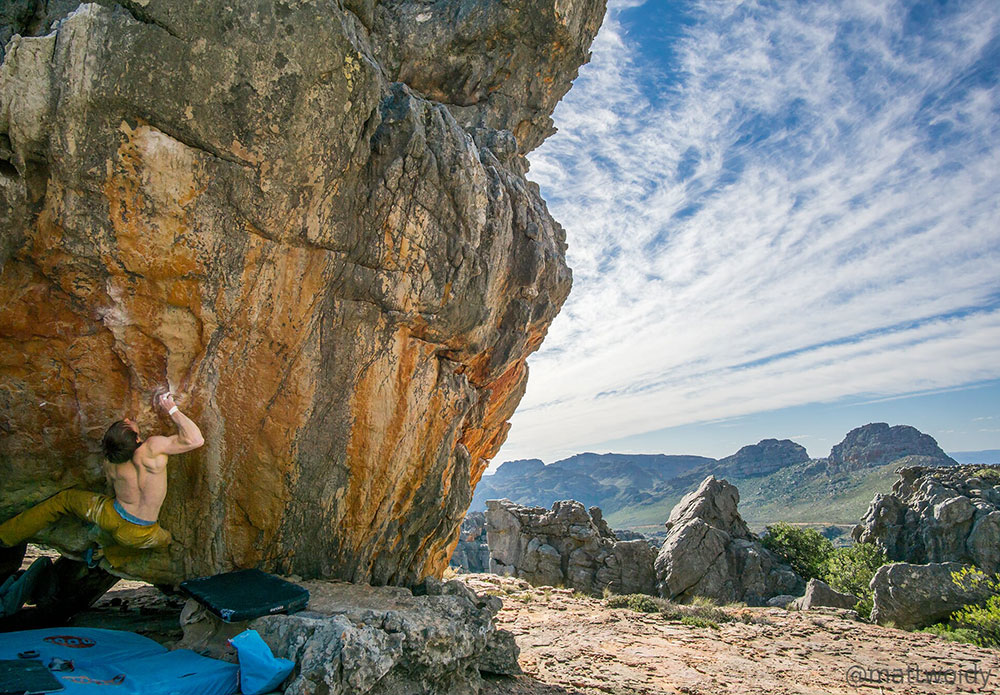 Above: Armed Response 8A+