Sanction (8b) by Hamish Potokar

If - around this time last week - you happened to be heading out on a midday stroll in Levengrove park, you might have been shocked to witness a series of bizarre shrieks echoing across the Clyde from the dark jumble of boulders which lurk in the shadows below the main face of Dumbarton Rock. Stare a little longer and a funny looking figure might have popped in to view, waving his arms around a bit before collapsing on to a sunny bit of rock and remaining motionless for the next half hour.

It must be funny for an outsider to observe the vast emotion which amounts between man and rock in the process of projecting, and maybe on the whole its best us climbers keep these raw displays away from the public eye (luckily no one called the police for the crazed – and subsequently dead – looking figure wondering the grounds of Dumbarton Rock). Anyway, as a climber communicating with (hopefully) other climbers, I feel it’s OK this image with you, which is probably a familiar one to any climber who has ever invested time and energy in to something near their limit.

Sanction at Dumbarton rock is defiantly the longest-term project I have ever had, despite not necessarily being the hardest. Originally climbed by Dave Macleod, it hides at the edge of the boulder field, taking a striking line up the steep roof to the left of the classic 8A Sabotage. The moves are cool and complex, but I won’t go in to them here, as it’s not the physical difficulty which made this line ultimately so challenging for me. Indeed, given the scenario in which I could have got on it on my fist session, with all the beta knowledge I ultimately worked out, and some fresh skin, I’m sure (in theory) it could have gone pretty quickly.

Well maybe it still would have taken a few sessions. But my real point here is that physical condition wasn’t the biggest battle I had to fight with this boulder. When working on something hard, there are so many contingent factors which extend beyond physical strength upon which success rests. Skin condition, weather, spotters, beta, warmup, psychological preparation, rest timings, remembering you’re lunchbox, not getting smashed the night before etc etc . Certainly, for me it was frustrating to have to spend so much time staring at a boulder I knew I was capable of doing, whilst persistently succeeding in not doing it. However, as a result of this process I think I’ve learnt lots about the way I approach projecting, and maximising chances of getting the deed done.

So here are a couple of switches I made to my approach over the course of this process which I feel provided the biggest breakthroughs, and helped my transfer physical capability in to some tangible success.

1) Keep it playful – no tunnel vision

One of the challenging things about Sanction is the amount of holds on it. May sound weird, but an abundance of features (most of which are admittedly quite bad) just makes the task of finding the right sequence all the more baffling. There are so many different ways of climbing this thing – all subtly different – and all lending themselves to different body shapes/types/strengths. Finding the right movements to climb a boulder are essential to climbing it, and the closer the thing is to your limit, the finer these margins of movement become. I originally wrote Sanction off as ‘too hard for me’ because I couldn’t do it the way others I’d seen had tried it. It was only when I started to really experiment that it started to feel possible. A few months back I had strongman Aidan Roberts staying with me, and on a damp day we decided to piss about on Sanction, one of the only things dry. A few wild things were tried, and eventually emerged a beta which made the last move OK for me. SO there’s as sub tip I guess: 1 i) Try things with mates, it’s a good way to get creative and experiment. Fast forward to the day I did it, and again it was a subtle switch in beta which made the difference. Thanks to a sharp undercut you take to set up for the final move, a small mouth started to appear on my left index. In desperation at the prospect of having to leave again empty handed I had a random go, taking the undercut in a slightly different (and less painful) way and, hey presto; the final move felt easier! Ten minutes later I was standing on top. Not sure of a sub tip for this one. 1ii) destroy your skin to the point that you’re forced to change your method? Maybe not..

Another point relating to this. Don’t let familiarity hinder you. Obviously developing good muscle memory is a positive consequence for becoming more closely acquainted with your project, but for me I also found it could be unproductive. Switching in to autopilot meant I’d often over-rush the sequence and as a result make silly mistakes. In the end, to make goes count I learnt I had to really slow down, and execute every move carefully and precisely. Maybe more of a personal point for me, I tend to rush things when I climb. But worth putting down anyway.

Sounds (is) cliché, but for me was still a really useful switch in attitude I gradually took. Over the course of many session and a series of minor disasters (falling of the easy topout on two separate occasions, putting myself in crutches for a week, many flappers etc.) it was difficult not to feel like there were forces against me. The process of projecting is mainly constituted of failure, and it can get hard not to let this get in to your head. I think the key to dealing with this (and it’s easier said than done) is divorce the process as much as you can away from the binary of success/failure. Thinking back, I think some of my most memorable climbing experiences have happened when I’ve been able to access a mind state in which I focus purely on movement. Conversely, the most disastrous have been when I’ve allowed the idea of success to creep in to my mind. Two times on Sanction, having stuck the last hard move, the prospect that ‘This is it!!’ started flashing in my brain. A couple rushed moves, some floppy core, and I was rolling down the hill.

The third time I stuck the last move I had (finally) learnt, and though the dim prospect of success was present in my mind, I was able so shrug it aside enough to focus on the moves and reach the top. This is just an example, but I think the principle applies pretty broadly. Stress and pressure emerge in projecting when the concept of either doing or not doing the climb fall in to focus. And I think that most of the time (at least for me) these emotions aren’t productive.  Once you can persuade your mind to forget about these things, and make the climbing about the climbing, about enjoying the process of trying hard and pushing yourself, these hindrances should start to fall away.

So, there’s a couple reflections on things I found useful. Hopefully they might resonate with others who have had similar battles with the rock. Good luck ! 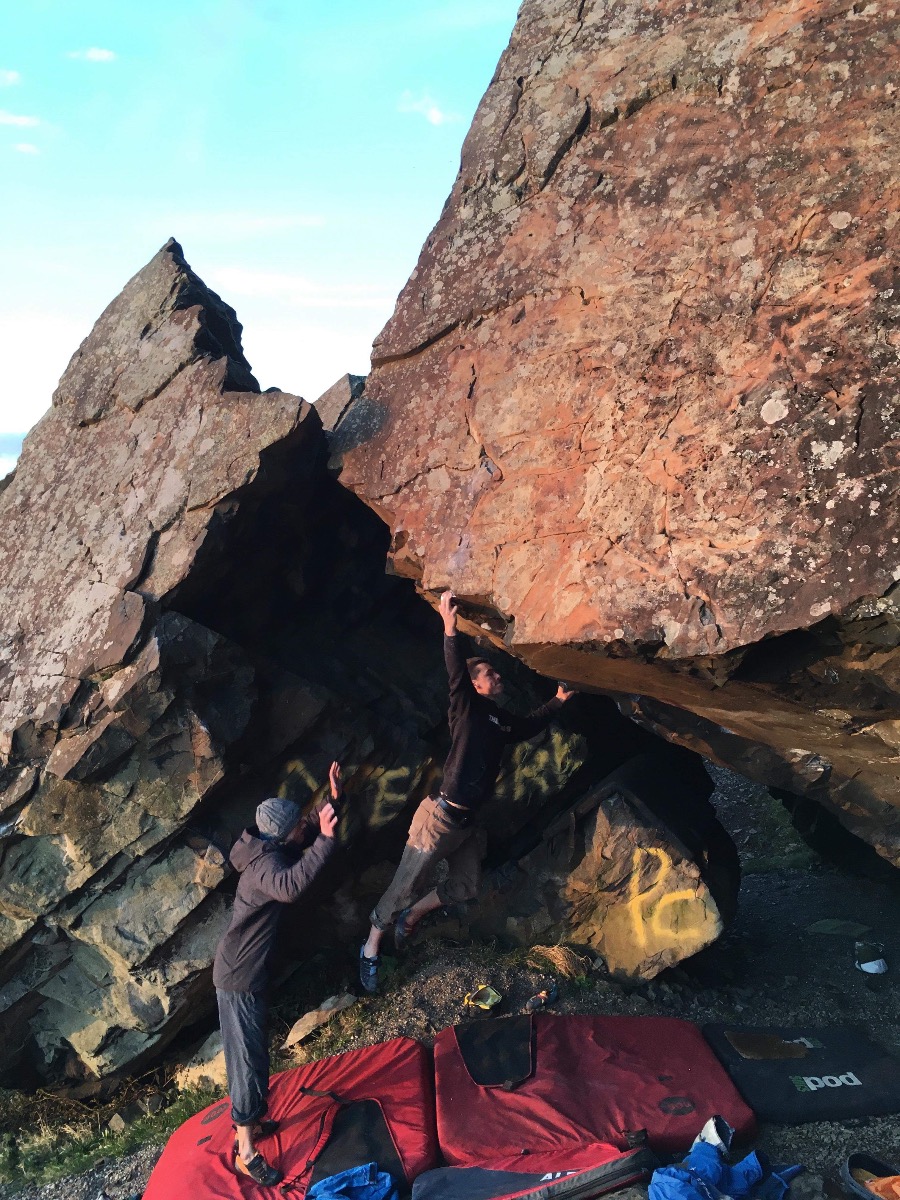