Climbing has long been the preserve of outsiders; the weirdos, the obsessives. But as the climbing industry caters for a broader market and mass appeal, walls and gyms today are becoming gentrified. Brand new brightly coloured holds, WiFi, yoga classes, posh coffee. Yet at the back of an industrial unit in Sheffield lies a reminder of a simpler age. A time when the aforementioned obsessives wanted nothing more than a few holds on a plywood board in a dusty room to pull down on. That time was the mid-1990s, when bouldering was poised for global stardom, to take its rightful place as an equal alongside its trad and sport counterparts. 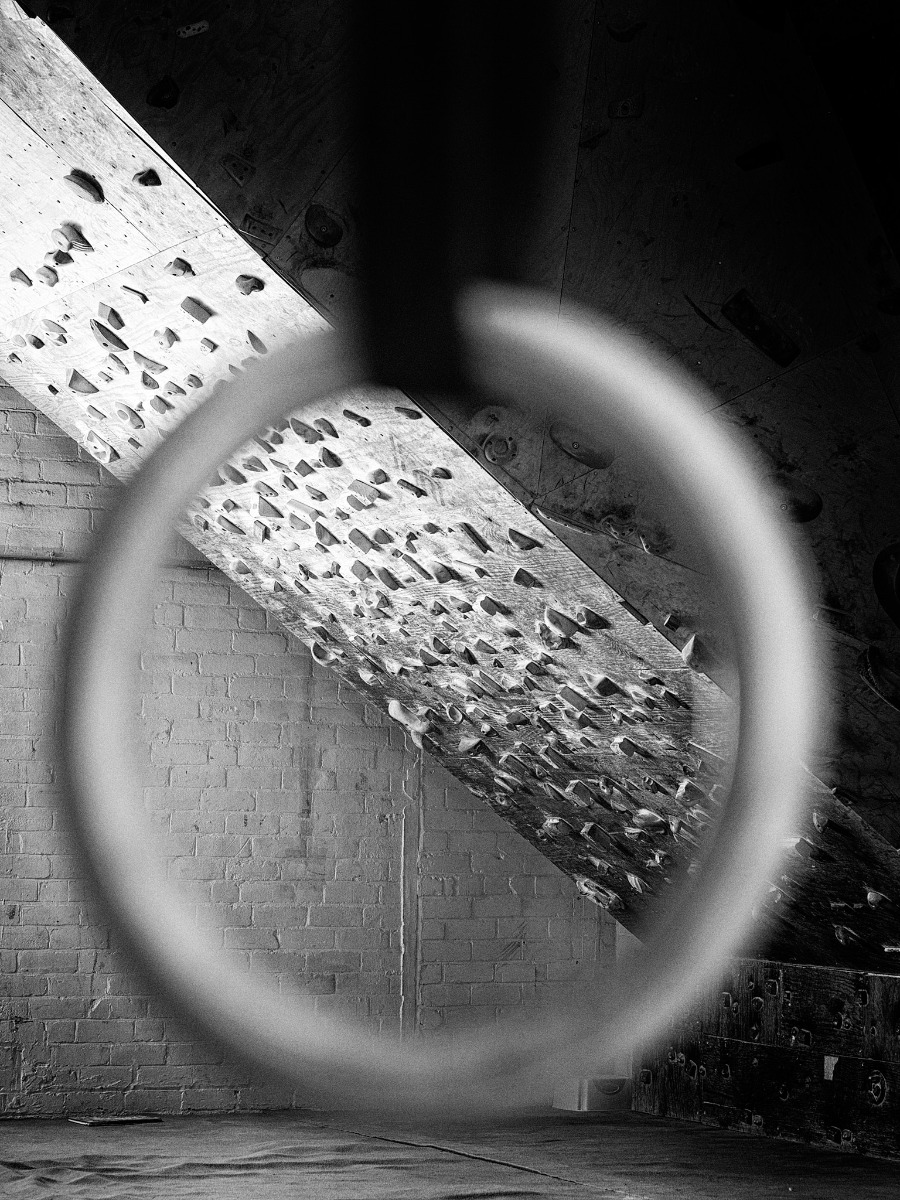 Its holds look positively archaic now. The resin holds of the time were not the ergonomic beauties of today, and the wooden holds are a motley ensemble of sawn up banister rails and random scrap offcuts, their layout probably a combination of random chance, judicious tweaking, and a bit of luck. In the same way Alexander Fleming discovered penicillin by accident, the early Schoolroom pioneers fortuitously stumbled upon the formula for what would become the standard for training boards worldwide.

There are no volumes and clever trick moves here, no coordination dynos. But what you do have is bags of character. The passage of time has given the bare plywood a dark patina like an antique workbench. Some holds themselves have, in many cases, seen better days. Hundreds of pairs of hands and feet have traced their climbing aspirations across these chunks of resin and roughly cut wood. They have left us with not a time capsule from the past, hanging in stasis, but an evolving piece of climbing history, the like of which we see on every outdoor crag but very little in the world of indoor climbing. So let’s take a dive into the world of the School holds. 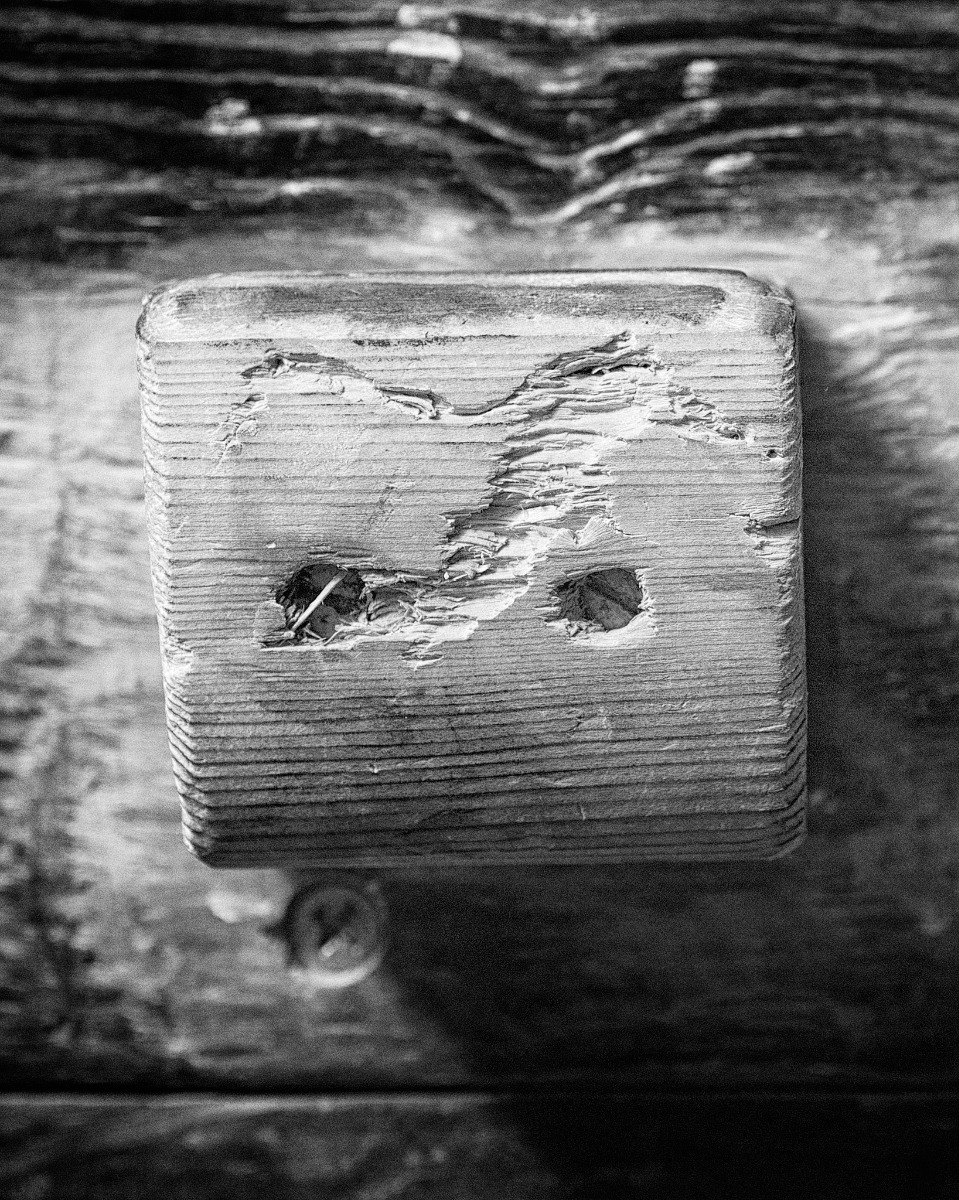 If you cut this hold in half, the insides would read ‘schoolroom’ like a stick of Blackpool rock. Actually, to be more accurate, if you cut it in half you would end up with two smaller but otherwise identical holds, because this hold started out life as a humble bannister rail.

In its second life, this bannister helps climbers ascend to the heights of Schoolroom accomplishment; power, glory, and a place in the Sheffield climbing hall of fame. The Schoolroom bannisters are fantastically comfy to climb on and surprisingly versatile - straight hold, undercut, pinch - but they are also notable because they represent a very early instance of upcycling.

Yes, before that term was even conceived, the 1990s Sheffield board cognoscenti were already reducing their carbon footprint, meaning driving to the crag in a 16-valve Lancia Delta HF 4WD Turbo was a guilt-free affair. Good times. 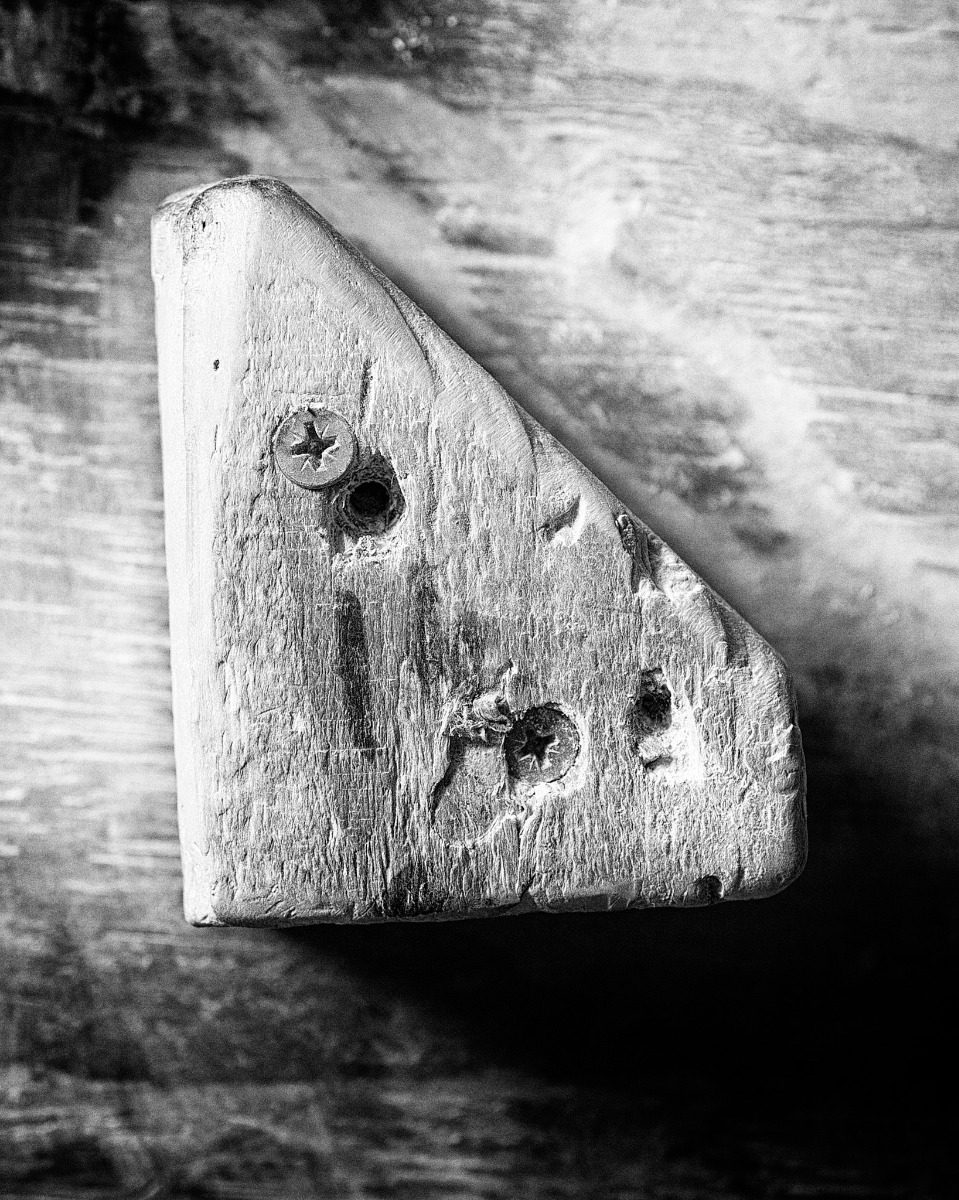 In stark contrast to today's lovingly sculpted resin holds - with ergonomic shapes, carefully sourced materials and finely crafted textures and coordinated colours - C14 has the look of an offcut piece of wood pulled out of a skip and given to a dog to chew on for half an hour before being unceremoniously screwed onto the board. The outer face still bears the hint of blue paint that hints at its former life, pockmarked by nail and screw.

Who knows what circumstances lead to this unpromising looking scrap of timber winding up in Sheffield in 1993, but from its humble start in life it was destined for greatness. Every problem using this is a banger, including the ever popular Woodology, the completely in-your-face Schoolboy, and the often overlooked Schoolgirl.

So next time you walk past a stack of broken pallets in Halfords carpark, just think what classic holds of the future are sitting there patiently awaiting their moment.

A true workhorse, B35 gets more traffic than virtually any other hold on the board. Not because it has any particularly aesthetic qualities, but because of its sheer versatility.

Is it a pinch? An undercut? A jug? A dish? Scientists have failed to classify it, but anyone who's ever climbed on the 50 degree board will testify that it features on many bona-fide classics. From lowly warmups, to hard test-pieces, and everything in between. Basic Jez, Michael Jackson's Silver Glove, Basic Level Of Power, Total Recoil, Pego's, Peter Pan Handle; the list of board problems elevated to household names goes on. B35 is the Swiss Army Knife of board holds.

Incidentally, you will be glad to know an exact copy of this hold features on a child’s playground somewhere in Sheffield, so we do have a backup should the unthinkable happen. (The location remains a closely guarded secret to discourage trophy hunters.)

The passage of time has not been kind to B31. Its former glory days as a solid 2-screw hold are long gone; now, tenuously pinned together, it somehow manages to survive, albeit with the help of a protective resin foothold. But none of that detracts from the sheer delight to be experienced the first time you manage a move off it, and ANY move off B31 is a victory.

You'll probably want to learn to take the hold in just the right place, to align your fingertips with the subtle fingernail-worn grooves in the soft layers of the plywood to achieve maximum depth on the hold. Perhaps you're going to the green horizontal pinch C12 on the ultra-classic Stuey Five Bellies. For a moment, for a split second, you are the bleach-haired cotton-lycra-wearing Ben Moon circa 1995. And money can’t buy that feeling. 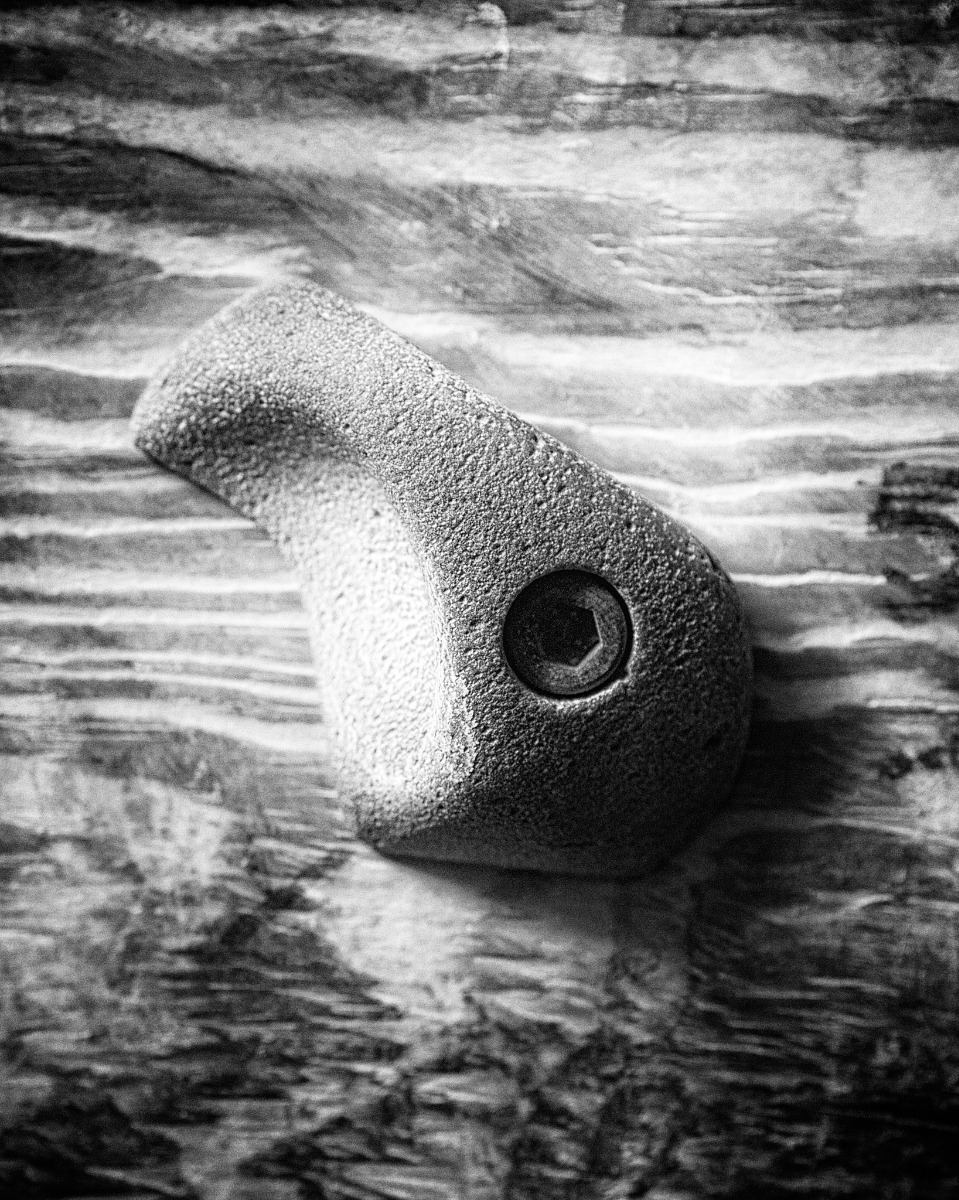 The legendary B58, the famous grey diagonal edge/pinch, barely three inches across the longest point, pivotal to so many of the established classics; Total Recoil, Pegos, Turd Reich, Pork&Beans.

On some problems the key is to gently drag it, dropping your little finger beneath the subtle angle change low down, with the thumb barely pinching the bottom of the dish. Yet on other problems the aspirant climber must hit the hold violently and attempt to almost destroy it with a high aggressive vice-like pinch grip on the narrowest part of this dark resin masterpiece. It even serves as a steely backhand on Pumping Pistons.

The provenance of the hold is unknown; possibly Bendcrete or DR, early 1990s vintage, but whoever made this innocuous beauty deserves a pat on the back from the many Sheffield climbers who have crossed paths with it over the years - chapeau.

And to the future...

The Schoolroom boards are, of course, not the sole historical curiosities out there. The UK still sports a couple of remaining 1990s curiosities such as the Bendcrete "artificial rock" concrete structures - Newcastle’s Eldon Square wall springs to mind - but these fixed walls remain outliers. The frequent resets demanded by today’s market means that on contemporary flat-panel style walls there's not much chance you'll find yourself pulling on the same problems that the masters of ten or twenty years ago tested themselves on. Even where climbing walls have dedicated training boards it’s rare for them to be left alone without tinkering or resetting for more than a couple of years - a mere blink of an eye in board time.

But these surviving relics are still out there for anyone inclined to step away from the mainstream. A taste of the past, but perhaps a hint of what’s to come? We are often told the future of climbing is indoors, but we’re also told that to reach our potential we need to put the hours in. Embrace the siege, buckle up for the long battle. After all, nobody climbs their hardest problem in the space of a few sessions. So will the concept of the permeant indoor test-piece find a new home in the walls of tomorrow for the new generation of indoor-only climbers? Maybe this is the niche the likes of the Moonboard will fill. Can accumulated sweat, chalk and grime live peacefully alongside the sofas and posh coffee?

They say things come in cycles after all.

Words and Photos by Dave Parry.