Buster Martin recently made the first ascent of Persian Dawn 8C+ which is a direct finish to Make It Funky at the historical crag, Raven Tor in the Peak District. Below is a short article Buster wrote about his first ascent and some history into the crag, the routes and the first ascensionists behind the famous climbs.

Make it Funky was first climbed by the legend and one of UK’s most committed climbers and first ascensionists, Mark ‘Zippy’ Pretty in 1993. He send the climb after 60 days of effort spread over 3 years. Named after a Sheffield club night popular with climbers at the time. The route features burly but technical climbing on okay holds but steep ground with lots of heel hooks and toe hooking, which was considered to be very modern and slightly different at the time of the FA. Make It Funky starts up an initial boulder problem to a good hold for the left hand, referred to as the dogs mouth. It’s a decent hold but only for the one hand, and with poor footholds it doesn't offer much opportunity to rest. At this point, Make It Funky loops out left and back right to the belay of Mecca, via an infamous mono move in an old bolt hole,  Zippy removed the bolt revealing the mono, whilst preparing for the first ascent.

Once you hit the dogs mouth jug the main difficulties of Make It Funky are over with just a 7Aish boulder to finish and this bottom section is around 8A boulder or 8b+/c route. At this point Persian Dawn continues straight up via a delicate yet technical sequence on some very marginal holds, made holdable via a high left heel hook. This section is around 7C boulder. 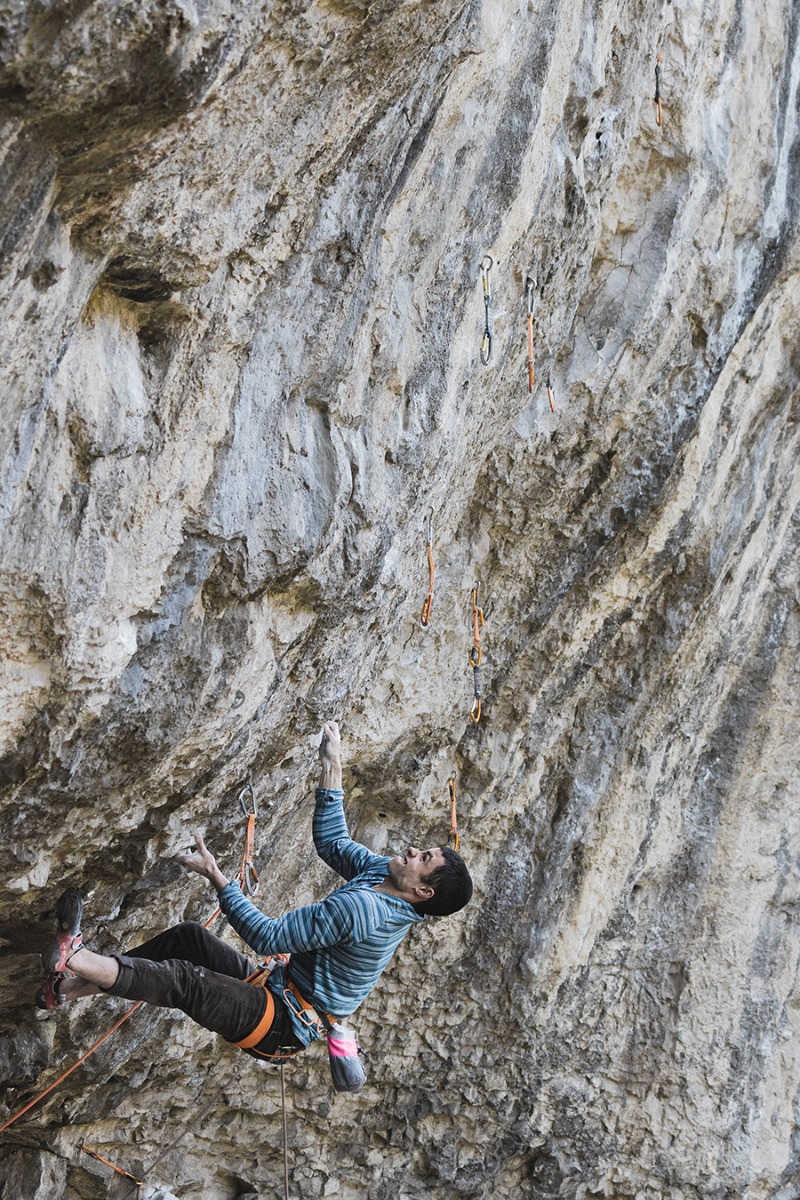 I first caught wind of the route when Ben Moon mentioned it to me after I’d climbed Make it Funky in a couple of sessions last September. The route has been attempted over the years by: Rupert Davis, Rich Simpson, Ryan Pasquill. Steve Mac was kind enough to give it a clean and put a bolt in it last autumn and the route remained an open project, with Steve having a few sessions, as well as Mat Wright and Ben Moon having a go.

After moving back from a winter in Spain I was back at the tor and went up a couple of times at the end of my bouldering sessions to have a look. Mostly just sitting on the bolt looking for holds, I struggle with small holds and didn't really make anything of it. Last weekend I got psyched and worked out the boulder problem with the high heel beta found by Alex Norton.

Initially I worked out a sequence going straight up from a crimp on Make it Funky, avoiding the crux move of to the dogs mouth. But quickly realised there was nowhere to clip from, so then worked out a sequence using the dogs mouth and coming back across. This was a bit harder but allowed you to a clip and chalk up. There was talk that this hold should be eliminated to keep things super direct, but the reality is its only about 3 inches further left than the other holds used and would be a shame to force an eliminate.

There’s also the possibility for a different sequence straight from the jug up to a high pocket that I used for my thumb, for those with a long reach (as tried in the past by Simpson and Ryan) Although this would probably be just as hard.

Coming back mid week I struggled to get up Make It Funky again, I was a bit miffed as it had gone down without much trouble, after 3 months in Spain I’d forgotten how subtle and tricky peak climbing can be. I was quickly humbled but came back on Sunday and sorted out the micro beta and got the route done.

Buster named the route after a book of stories written by my great-grandfather called 'Persian Dawns, Egyptian Nights' in keeping with the middle Eastern theme of some of the other routes at the Tor like Arabian Nights, Mecca, Hajj and Kaabah.

Hoseok Lee on Training, The Moonboard and Hard Boulders

Life on the Mini Moonboard

Bouldering and Board Climbing Tips. A Video Series by Eliot Stephens
Popular Posts

A Beginner's Guide To Campus Boarding

Leg Day For Climbers - Exercises You Can Do At Home