On today’s menu we have a special treat for you… We’re going to analyse every MoonBoard problem ever created! I don’t really know what we’ll find, if anything, but I’m keen to get stuck in to the data and see what pops out. I’m going to stick to the MoonBoard 2016 setup, as it currently holds more than 18,000 problems, (apologies to the contradicting title) a lot of data, a lot of analysing!

The first question that comes to my mind is, which holds get used the most? 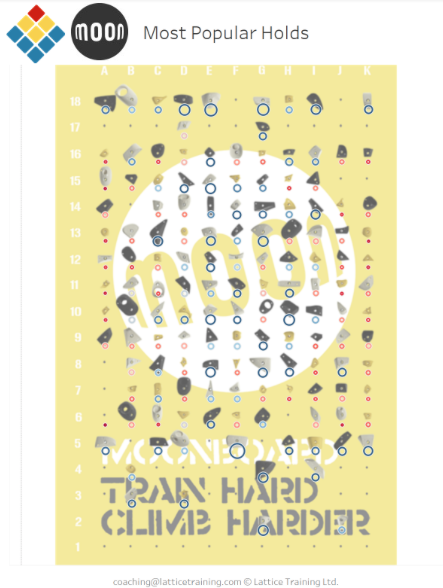 It looks like holds in the centre of the MoonBoard tend to get used more often than those on the edges of the board. In practical terms, this could make sense as creating problems towards the edge of the board can get tricky. It could also be due to the layout of holds on the board; perhaps people just prefer the centre holds, so they tend to climb there more? It’s hard to say for sure. In a similar vein to the above, we can look at which are the most popular rows and columns. 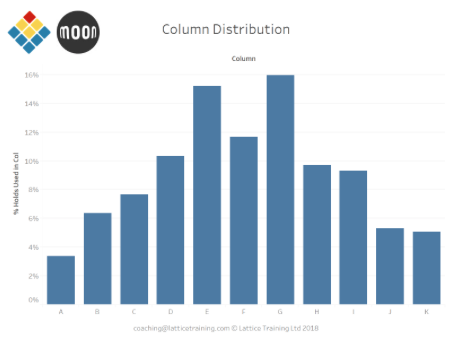 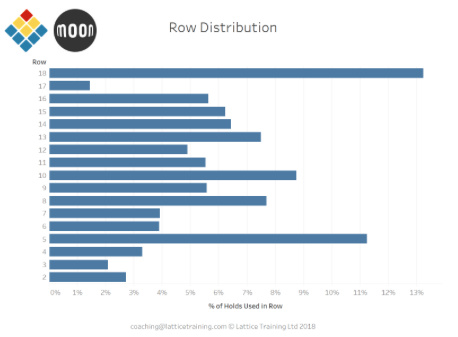 Looking at the columns graph, our suspicion from the heat map is confirmed. Holds in the centre of the board tend to get used a lot more than holds towards the outside. To me, the symmetry around column F (the central column) suggests that the centre of the board isn’t just popular because of the holds used there, if this was the case, I’d expect to see more noise around these central columns as climbers followed their preferred holds.

Interestingly, the right hand side of the board is slightly more popular than the left with 45.4% of holds used being on the right, 43.0% on the left and the remainder in the middle. This might be an interesting effect, but it’s more likely to be a product of the hold layout.

Looking at the rows, we see that #5 and #18 are particularly popular. This makes sense because a condition of adding a problem to the app is that it has a start (one or two holds on row #6 or lower) and an end (any hold in row #18). After that, rows #10, #8 and #13 are the most popular. Looking back to the heat map this is probably because there’s some pretty big holds on those rows, for example, H10, E10, C13. Low grade problems are likely to use bigger holds and there is a higher proportion of low grade problems than high grade problems, thus the bigger holds are likely to get more use. 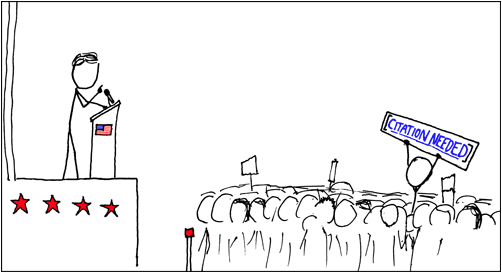 Talking of grades, let’s have a look at how problems are distributed grade-wise. 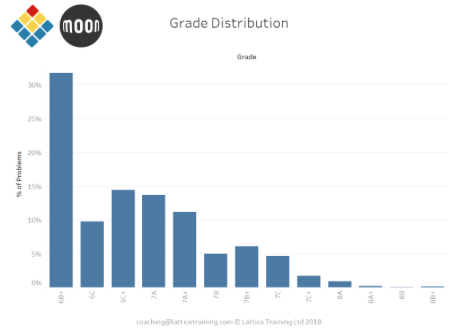 The large proportion of problems at 6B+ stands out here. My guess is that a lot of these are people testing out ‘add a new problem’ in the app as the default grade is 6B+. From there on, the grade distribution is roughly as we’d expect (i.e. more easy problems than hard problems).

I wonder what will happen if we do the hold heat map from above, but instead of looking at hold popularity, we look at the average difficulty of problems that use that hold? 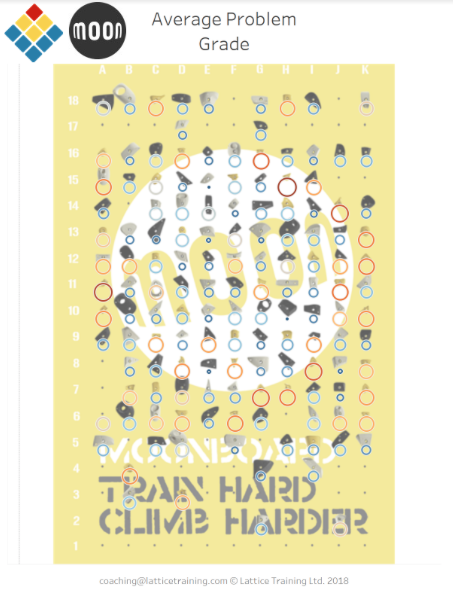 I had to eliminate all the problems graded 6B+ here because they were throwing all the numbers off. One interesting observation, is that many of the yellow holds (aka The Original School Holds) tend to be used on harder problems. This makes sense, as lots of them are tiny little desperates!

Now to have a little fun… Can we make a problem that is democratically the easiest problem on the MoonBoard? How about the hardest?! Making an easy problem is…easier…because all we need to do is find the easiest start hold (F5), the easiest end hold (E18) and add easy holds in easy to hard order, until we’re left with something vaguely climbable. Future classics? I’ll let you be the judge of that…

(Make sure to be logged into moonboard.com to view the problems)

What happens if we try a similar thing with the most difficult holds?

I’ll stop there, because while these problems are obviously hard, they’re probably also rubbish and will clutter up the app. What we’ve basically done is a classic trap for poor setters…small holds far apart.

I’ve already spent too long on this so I’ll leave it here for the moment. If you’ve got any thoughts for cool analysis we could do with this data or questions about this piece, then you can leave a comment below or drop us an email.

Hoseok Lee on Training, The Moonboard and Hard Boulders

Life on the Mini Moonboard

Bouldering and Board Climbing Tips. A Video Series by Eliot Stephens
Popular Posts

A Beginner's Guide To Campus Boarding

Leg Day For Climbers - Exercises You Can Do At Home